In a new extortion scam, a cybercriminal is sending threatening emails to unsuspecting users asking them to pay a whopping $4,000 in Bitcoin or wait to be executed by a hitman.

In a new extortion scam, a cybercriminal is sending threatening emails to unsuspecting users asking them to pay a whopping $4,000 in Bitcoin or wait to be executed by a hitman.

The email extortion scam surfaced on the Internet a few days ago and is currently arriving in victim’s inbox with the subject line “Pretty significant material for you right here 17.12.2018 08:33:00.” According to Lawrence Abrams of BleepingComputer who was the first one to report the scam, the email’s content is written in poor English with full of grammatical mistakes.

The sender claims to run a Dark Web website with different services including hiring a hitman. The email further states that someone bought their service to execute the recipient but it can be sorted out meaning the hit along with the hitman will be called off if they are willing to pay $4,000 in Bitcoin within 38hours of receiving the email. 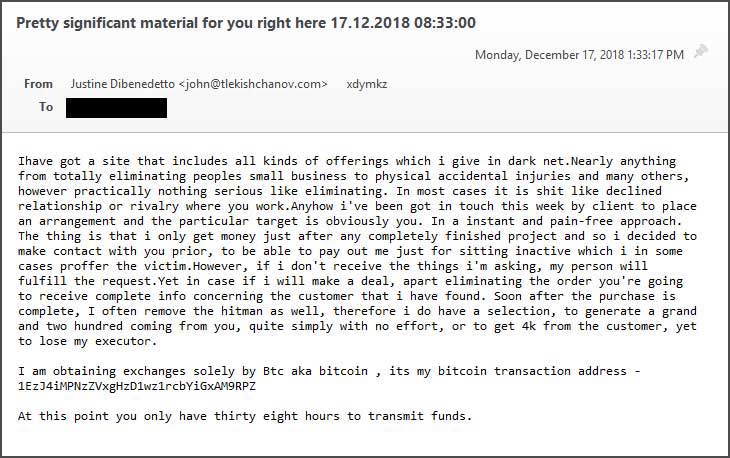 At the time of publishing this article; there were zero funds in the Bitcoin address provided by the cybercriminal probably because of the email’s amateur content. Therefore, if you have received this email do not panic and simply mark it as spam.

This, however, is not the first time when someone has claimed to run a dark web website that provides revenge. In April last year, HackRead exclusively reported about an advertisement on (now seized) Hansa marketplace on the Dark Web offering revenge services in BTC 0.5594 (USD 700.50 at that time). The listing’s description explained that these services will be provided to people looking for “Revenge on ex, co-worker, neighbor, someone they hate, boss or an ex-friend.”

Moreover, cybercriminals used a sextortion scam to steal money from users for instance; victims were asked to pay $1900 and threatened that footage of them watching pornography will be leaked to their families and friends. Initially, the email looked legitimate since it contained the old password of the recipient but the trick was that cybercriminals utilized users’ old passwords leaked in previous data breaches to blackmail them.